Nominate a Student
Our Approach

Named after the first Black American to graduate from college in the United States, ATA admits students in 5th grade and supports them on their journey to and through high school and college through rigorous, year-round academic programming, support, advocacy, enrichment, and mentorship.

Alexander Twilight Academy nurtures the next generation of great leaders, thinkers, creators, and changemakers to live meaningful lives of passion and purpose.

ATA students had a 429% change in score in English Language Arts in six weeks.

ATA students had a 240% change in score in Math in six weeks.

On average, ATA students increased their total Math scores to a 91% which is classified as Advanced (90-100%) on the MCAS.

Student Gallery
Click through to see our students’ work in action.
Scroll Me 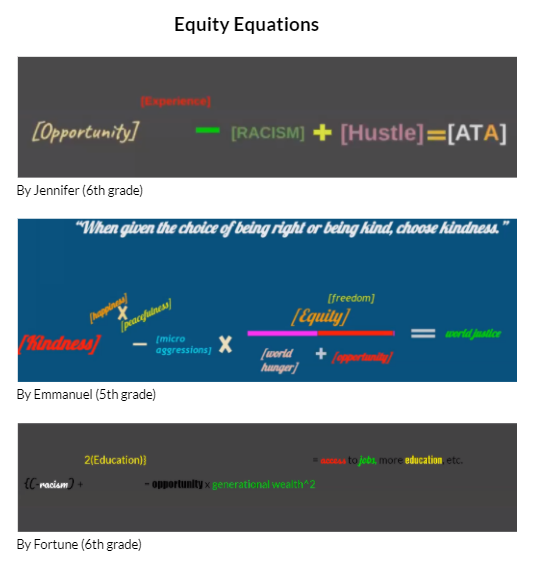 By 5th and 6th Grade Students

By 5th and 6th Grade Students

“Call to the Wild”

As I wake up I hear the little birds
singing high above
Tweeting their little songs,
I hear the roosters singing
their songs too,

Trying to imitate the birds
who fly above before dawn,
and as I go outside I see the
Vast land that lies ahead of me:
the mountains, the oceans, the valleys.
I see it all,

When I go to my little mountain I spread
my arms feeling the wind beneath my arms,
I am a bird

And as I scream and yell my voice
echoes through valleys stretching far and wide,
I am a lion

As I run through the open fields, past
the willow tree, past the oceans, and past the deserts,
I am a Gazelle.

And finally, as I look at how far I have gone,
and all that I have seen, I finally realize,
I am a bird, a lion, and Gazelle.
I am light, I am fierce, I am fast.

I am light like a feather,
I am free like a bird,
I can fly to many
Destinations.

I am fierce like a lion,
I can roar to scare
Shadows lurking in the
Darkness.

As the moon falls, I go to bed
thinking of what I did today,
what I’ll do tomorrow,
And how I’ll seize the day.

“The Face of War”

Look at the face

Of the soldiers before you

Puppets, slaves to the whim of their nation

Further the reputation of their country

A scourge on this world

Fighting to win, but the victors don’t see the cost.

The losers, taken away from their beliefs.

Bodies lining the battleground as the blood of the enemy is on your hands And then,

You hear a bang,

And you feel the heat of a bullet go through you

And the cold embrace of death closes in on you

Carrying you to a safer place.

This is the face of war.

The History of Redlining

Have you ever noticed the striking difference between neighborhoods in America? How you can walk down the street from one area, which is much more urban, and another area, suburban. The main difference between the people inhabiting these neighborhoods is, you guessed it: race. People of Color make up most urban parts of America, while white people make up most suburban parts of America. Dorchester, Massachusetts is 21 percent white, 45 percent black, 18 percent Hispanic/Latino, and 9 percent Asian. While Newton, another city in Massachusetts, is 76.7 percent white, 3 percent black, and 14 percent Asian. The reason some of these neighborhoods are so racially separated is because of redlining. Redlining is the practice of denying loans and other forms of financial aid to people in a specific town based on race or ethnicity. Although it is illegal in America now, the effects have lasted generations. First, let's learn about the history of redlining.

The Great Depression in the 1920s to 1930s was tough for most Americans. By 1933 a quarter of Americans were unemployed. Franklin D. Roosevelt’s New Deal allowed the National Housing Act of 1934 to take effect. Looking to incentivise and promote home buying, this allowed the Federal Housing Administration to financially support home buyers. However they limited their aid to white prospective buyers. This furthered housing segregation in America. Redlining was just another way people in power ensured their money and power couldn’t be threatened. We’ve seen this before in Black Codes, Jim Crow Laws, and voter suppression.

Let’s look at what a map of redlining looked like in Richmond, Virginia. There were different colors marked over neighborhoods representing grades. The green represents an “A” grade, meaning there are promising white homebuyers in the area. This incentivised the Federal Housing Administration to give more financial support because these buyers were “the most likely to flourish.” The blue represents a “B” grade, a little less likely to receive support. The orange represents a “C” grade, not too likely to receive support, mostly people of color in this neighborhood. Finally, the red represents the “D” grade, extremely unlikely to receive any financial aid from the FHA; almost all people of color live there.

Predominantly black neighborhoods were the most likely to receive a “C” or “D” grade, hindering their opportunity for financial aid.

Not only does this affect the people’s ability to generate generational wealth, it also leads to disturbing differences in schools, stores, healthcare, etc. To put this into perspective, redlining made it very difficult to refinance. Without this, retailers left redlined neighborhoods, even after it was declared illegal. Without retailers, you’re left with no fresh grocery stores, malls, restaurants, hotels, etc. Since the funding of public schools are based on the housing taxes of the area around it, and redlining decreased the overall quality of housing in predominantly low-income neighborhoods and schools are negatively affected, too. Without schools with adequate funding, the quality decreases. Meaning schools in urban, poorer areas wouldn’t be as high quality as schools in suburban areas. Without the best schools provided to everybody, everyone won’t get an equal education. Without high quality schools, jobs and passions cannot be pursued. Without high quality, people can’t earn money, staying in the neighborhoods built for them to never thrive.

Two politicians have proposed policies to helping those in redlined communities and reduce its effects. Kamala Harris, the vice president of the United States, wants to invest $100 billion in assistance for down payments(the partial, initial payment for buying expensive items) and closing costs (fees and expenses to finalize a home purchase), to be available to those who have lived in government or rental housing for 10 or more years in a formerly redlined area that is low-income today. Elizabeth Warren’s plan would offer down payment aid to first-time homebuyers in redlined areas or low-income areas that experienced legal segregation in the past, qualifying them for a grant (sum of money given by a charity or organization). This would be paid for by an estate tax. (a tax imposed on an estate owned by a dying holder before distributing money to anyone else.)

To conclude, redlining has created a lasting impact on those in lower income neighborhoods and cities. It is grim and unfortunate that most low income neighborhoods still face the effects of something directly imposed by the government without aid. However, learning what it is and what people are doing to combat redlining is the first step for equal land and home ownership in America.

“The Sound of the Violin”

Reverberates through my ears,

The power of the bow,

The bow on the string

I have love and respect

For each of these friends.

Making their own music

Emerging from a single instrument.

Propelling off the violin

Ricocheting off the walls

Reverberating in our brains

The sound of the violin

“The Immigration and Nationality Act of 1965”

Immigration happens all over the world

People immigrate for a better life

A life that twirls

A life of luxury diamonds and pearls

Or kids safely walking to school

But all those dreams changed because of some rules

Rules that say they cannot live there

But to find a better life and place elsewhere

Putting their lives at stake

For a country, a fake that doesn't want other peoples’ lives to get in their way

in a cold unheated building with many people with many dreams

People who wanted to be free

But were caught and who would’ve thought

Thought that they would end up here

The end of dreams are near

The life we wished we had

All because of some rules

But I want to help make a change

I want kids like me to attend all the best schools

I want them to have fun at public pools

I want people to have the freedom I have

‘’Immigration made this nation.’’

That is quite an exclamation

Imagine having to fear for your life when you go to a corner store.

Imagine having to lie about your religion to keep yourself alive.

Imagine fleeing your country and potentially risking your life just to make a living.

Imagine leaving a warzone to enter a warzone.

Imagine having a culture and history stripped from you

Oh but it’s okay at least you learned about the people who did that.

Why is it that you have to protect yourself from the people who are “sworn to serve and protect”?

Imagine living in a place where money is valued more than human lives.

Why is it “never forget” for 9/11 but slavery and the civil rights movement were “SO long ago, just forget about it?”

Imagine having to live in a place where speaking out on anything you find unfair, means being labeled as an “angry Black woman,” “a dirty Mexican,” a “dangerous Middle Easterner,” a “weird LGBTQ member,” etc.

Unfortunately, you don’t have to,

but you can acknowledge and do something about it.

Tell that to the victims of police brutality.

Tell that to the millions who can’t even honor their culture without being called “weird.”

Tell that to millions who can’t practice their Muslim religion without being placed in concentration camps.

Tell that to the millions who can’t even make a living- even with a job, due to the flawed American capitalist system.

Tell that to people who can’t be people